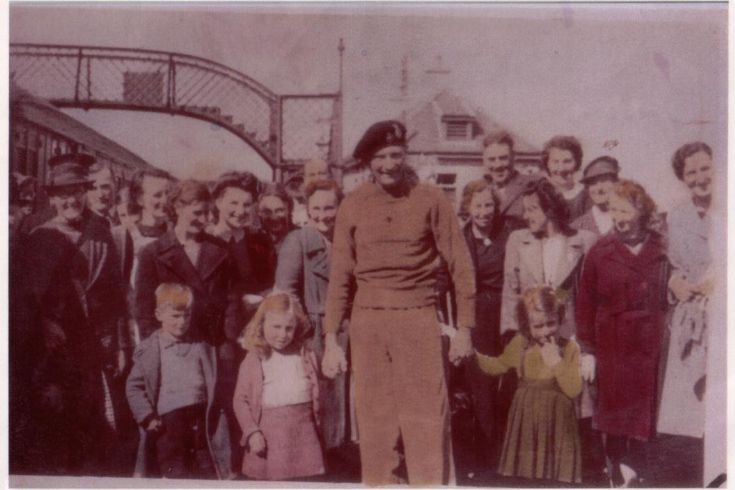 No: 439  Contributor: Douglas Abercrombie   Year: 1944
General Montgomery at the Station

General Montgomery at the Station (in colour on 13th May 1944). His D-Day plans - finalised at Dalwhinnie, were presented to HM King George VIth and General Eisenhower at St Paul's School, Hammersmith, London on the Monday. The special train named "Rapier" was based at "Addison Road Station" not far away. Mary McLagan is just to Monty's right. Mr"Pop" Poe is behind Monty's right shoulder.
Picture added on 09 April 2012 at 19:16
Comments:
The wee boy at the left in the front row is my brother Jim Anderson. Our mother behind him.
Added by Betty Anderson on 17 June 2012
But who are the wee girls?Where are they all?
Added by Douglas Abercrombie on 20 June 2012
I think the one on the left is Hazel McPhail and the one on the right may be Margaret Shand.
Added by Betty Anderson on 21 June 2012
Great Betty!Where are they all now?
Added by Douglas Abercrombie on 27 June 2012
My brother Jim lives in Dundee - a very hale and hearty 72 years of age. I saw Margaret and Hazel at the reunion in 2004, and Margaret's brother Billy was at the recent reunion. He said Margaret was fine and living in Inverness.
Added by Betty Anderson on 12 July 2012
Betty-do any of these folks have other photos or stories they would like to share-by E mail or otherwise?
Added by Douglas Abercrombie on 26 July 2012